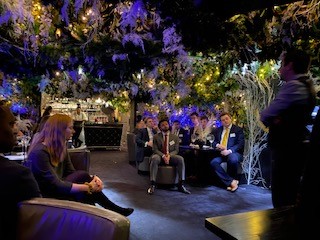 At each Tomorrow club, a group aimed at wealth managers and private client lawyers in their first or second job, we invite a speaker. Our recent event at the Gaucho club in Swallow Street, saw Mark Pearce of Gateley speak on mental health disorders and how they have affected his life and career.

"It is estimated that around 25% of the world’s population have mental health disorders.  Of these, the most common disorders are anxiety, PTSD (post traumatic stress disorder) and depression.  Approximately 20% of people have suicidal thoughts and around 6.5% of people have tried to commit suicide.  The problem is worse in the legal profession where a 2018 Law Society survey found that nearly 40% of trainees suffered mental health problems, 90% suffered stress related issues and 83% felt their employers could do more to assist them.

I had to make some fairly radical adjustments to my life:

This last point is particularly relevant as my boss, my colleagues and my firm made a number of changes to help me work more efficiently.  I now attend less BD meetings and social events, which has, to be fair, been bad for my golf game but it was never that great to begin with.  I normally leave work before 6 without having to worry about what other people may think of me.  I also work from home on a semi-regular basis, sometimes at short notice as there are times when I don’t feel able to be in the office and around other people.  Finally, I don’t travel abroad very much anymore.

Thankfully, not all of you will suffer from mental heath issues but some of you will and you will all, certainly, work with people that do.  The most important thing is to recognise the symptoms in both yourself and your friends.  People who are reluctant to attend events or, conversely, can only attend if they have several drinks.  People who seek reassurance following meetings or events.  People’s whose mood bounces from super-excited (Tigger) to very quiet and self-reflective (Eeyore).  Obviously, everyone has good and bad days but some people go from (as my boss would say) “indestructible” days/weeks to the polar opposite.

The key message of this talk is not to suffer in silence.  Speak to your team head/line manager/HR.  Where you are thinking about someone else it is hard to “tell tales” but it is far better that your concerns are shared and dismissed than bottled-up where no action can be taken.  You may think that all these things are easier because I am a partner and, perhaps, historically that might have been true but less so now.  In the last two firms I have worked for:

The net result of these changes and the additional support is that I now recover somewhere in the region of 95% of the time I record because when I am working I am concentrating on my work and not other factors.  I take far less sick days as most of these are now converted into working from home days (where I tend to get far more done particularly as I don’t have to commute in from Kent).  My BD is more focused meaning that while I have less relationships I get more out of them."