At the Citywealth IFC Awards

January 25, 2019
It was time again for the annual Citywealth IFC Awards this week, that took place in the stylish 5 star Rosewood Hotel in London.

Being so near to Burns Night, it involved a nod to Scotland, with the presence of a kilted bagpiper, and the obligatory downing of the traditional glass of whisky.

The evening was further lit up by the host of the event, the 6' 10" former rugby union player Martin Bayfield, body double for giant Hagrid in all the Harry Potter films. Great fun was had by all posing next to him for photos! 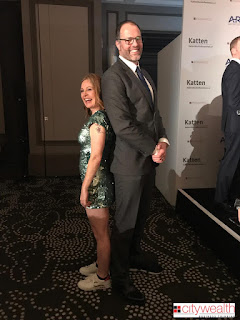 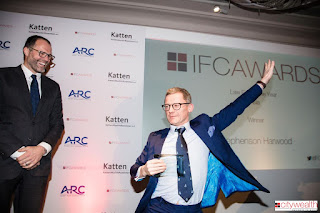 The cheery atmosphere must have encouraged generosity amongst the guests, as a whopping  £10,000 was raised for our charity partners, London's Air Ambulance, which had recently announced the patronage of Prince William, Duke of Cambridge. https://www.londonsairambulance.org.uk

The Editor's Choice Award went to Phil Games from Isle of Man law firm Simcocks, while the Outstanding Individual of the Year Award to Jessica Rowland, managing partner Guernsey at Mourant Ozannes.

Jersey scooped the gold award in the IFC of the Year category for the seventh consecutive year.

At the close of the award ceremony, guests continued celebrating in the hotel bar, with the compliments of Citywealth

And those who were still not quite ready to retire to their beds afterwards, took advantage of the tempting invitation to Tramp nightclub to carry on partying.