fun-filled evening at The Landmark London Hotel. Over 300 guests were assembled, some of them flying in

from the USA and Hong Kong, eagerly waiting for the winners to be announced.

The Awards, now in their fourteenth year and regarded as the Oscars of the finance world, recognise the best wealth managers and advisors in the private wealth industry, in particular those who invest money with charities, private families and foundations.
After a champagne reception in The Drawing Room of the hotel, buzzing with excitement, guests were ushered into the dining room by our esteemed toastmaster Paul Deacon and sat down to a fine three course dinner.
Former rugby union player Will Greenwood MBE hosted the evening and funds were raised for the charity Together for Short Lives that supports seriously ill children and their families. Dashing Lance Corporal Richard Jones, a magician and a Britain Got Talent winner, now an Ambassador for the charity, made an impassioned speech. 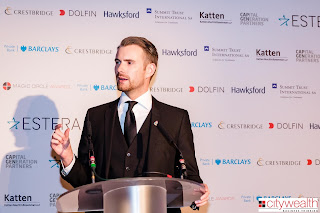 Fifty-nine awards were handed out with a special Memorial Award for the late Paul Hocking, chairman of Frank Hirth, who died in a tragic accident last year. Michael Lewis, director of the tax advisory firm, accepted posthumously the award on his behalf. 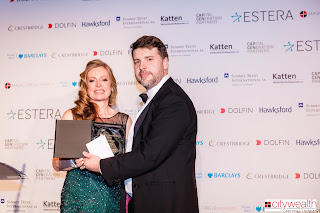 Karen Jones, editor at Citywealth, commented on the awards: “The private wealth industry has had a positive year in spite of Brexit. Our awards reflect the industry opinion on the multiple changes that have taken place over the past year and who is winning in the ‘new world’ of wealth management.”